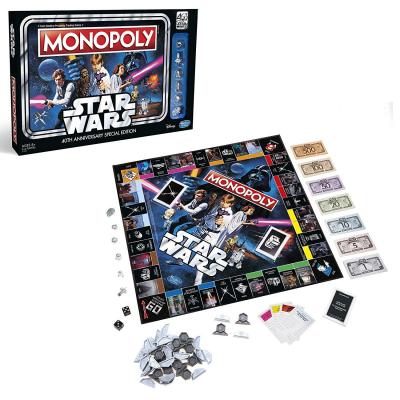 It's the Fast-Dealing Property Trading Game taken to a galaxy far, far away! Celebrate the 40th anniversary of the original Star Wars movie with this special edition of the Monopoly game. Players can relive the story of Star Wars: A New Hope as they travel around the board. Collect memorable scenes and iconic ships inspired by the 1977 movie. Strengthen power and influence over opponents by building Fleets and Bases. Force and Smuggler’s Cargo cards shape players' destinies in this exciting game. The only player left after everyone else has gone bankrupt wins!

• Celebrate the 40th anniversary of the movie that started it all
• Relive the original Star Wars story as you travel around a galaxy far, far away
• Collect classic scenes and iconic ships from the 1977 movie and make a fortune
• Build Fleets and Bases, and side with the Rebels or the Empire
• Players shape their destinies with the Force and Smuggler’s Cargo cards