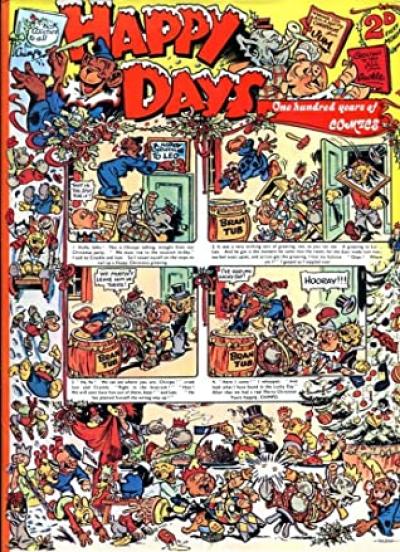 Denis Gifford's collection of comic papers is probably the larges and most comprehensive in the world. It extends to some 20,000 issues and from these Mr. Gifford has selected the most representative, the most rare and the most humorous of their style or period to portray the rise of the comic during the last one hundred years. From the first restrained 'panels' of Ally Sloper's Half Holiday in the 1860's, primarily aimed at an adult audience(and which may conveniently be regarded as the genesis of the modern comic), through the popular 'cuts' of the eighties and nineties whose circulation was doubled by Alfred Harmsworth when he halved the price to a culmination(of sorts) in the 'School of Corrr!!! and Aghhh!!!' energetically promoted during the last thirty years by comics such as Dandy and Beano.