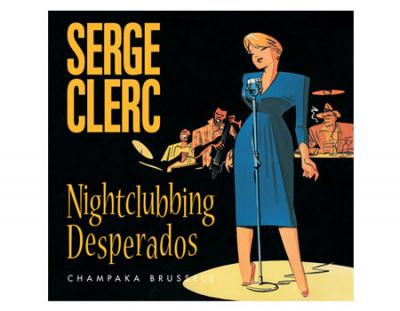 The leading light of “Métal Hurlant” when it was in its heyday and the main illustrator of the music magazine “Rock ‘n’ Folk”, Serge Clerc created single-handedly the style known as “Rock BD.” He captured with immediacy the ambience of Parisian nightclubs, populating his images with impossibly beautiful creatures teetering on impossibly high heels. As José-Louis Bocquet’s text demonstrates, “Nightclubbing Desperados” is conceived not just as a collection of superb illustrations, but as a portrait of the early ’eighties by someone who lived them. As the missing link between the classicism of the group known as the “Marcinelle school” and the modernity of the “Métal Hurlant” group, Serge Clerc was the originator of “Rock BD.” For over a decade he was to be an outstanding illustrator for both “Rock ‘n’ Folk” and “New Musical Express.” He moved in the same circle as The Clash, The Cramps, and The Police. His was a familiar face in the famous late-night haunts of Paris, London, Brussels and New York. Somehow, in between the thudding bass rhythms and the peroxide blondes, he managed to find time to draw. Of all the acclaimed illustrators of the ’eighties, Serge Clerc is undoubtedly the one who was most in touch with his times. His aesthetic sense was matched by his graphic talents, and this fusion gave expression to a unique and identifiable style that was to find favour with the French public in particular. The deceptive simplicity of his style and the pleasing geometry of his compositions would, over a short period of time, inspire an entire generation of artists; so much so, in fact, that it’s not unusual to come across examples of his work, shamelessly copied by anonymous drones.